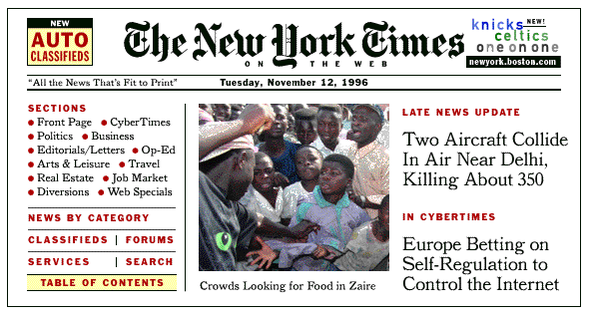 The New York Times homepage in 1996

Learning JavaScript can be tricky. It was born in 1995, and it was designed as a simple scripting language aiming to provide back then’s simple web pages some simple interaction capabilities. Did I already say simple?

Almost thirty years later, JavaScript has been the most popular language for the ninth year in a row. It powers web apps of unimaginable complexity by the standards of the time, web servers, desktop and mobile applications and literally anything you can imagine.

Its long and relatively troubled history is reflected in the language’s features. In JavaScript, even the most fundamental aspect of most programming languages — how you declare variables — has been affected by this huge shift in use cases and popularity.

Let’s see the biggest differences between the three ways you can do it: var, let and const.

To understand these differences we need to grasp the basics of scoping. In many programming languages, including JavaScript, any portion of code delimited by curly brackets is a block.

The scope of a variable is the region of your code the variable is “visible” in. You can think of visibility as the ability to access a certain variable without it being undefined or receiving an error.

There can be many scoping rules, but the most common is block scoping. In block scoping, every region of code delimited by curly brackets (block) defines a new area of visibility (scope).

Scopes, or areas of visibility, can be nested. The direct consequence of this is that you can re-declare a variable already exising in an upper scope without interfering with the original variable at all.

The difference between var, let and const

Variables declared using the var keyword don’t follow block scoping. They still have scoping rules, but blocks on their own have no meaning for them:

Instead of block scoping, var variables follow function scoping: only functions can delimit their visibility.

There are other features exclusive to var variables, but its confusing scope can easily lead to all kind of bugs and therefore their use is discouraged.

Variables declared using let and const are always block scoped, as shown in the previous examples. What’s the difference between them?

You can re-assign let variables as many times as you wish. To assign or re-assign means to use the = operator.

On the other side, const variables can’t be re-assigned.

Once assigned, a const variable can only refer to the same entity in memory.

You’ll still be able to add or remove elements from this array:

Remember: as long as you aren’t using the assignment operator = on a const variable, any other operation is allowed.